↓ Skip to Main Content
Home › One Murder Too Many Customer Reviews

One Murder Too Many Customer Reviews 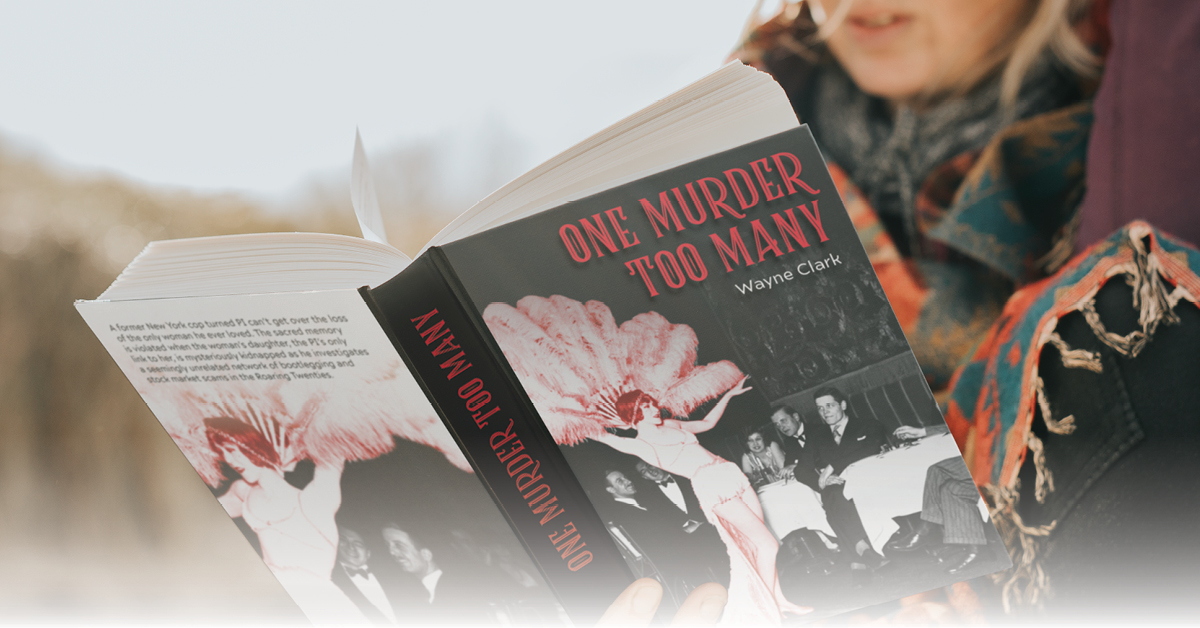 I have now read all 5 of Wayne Clark’s books and “One Murder too Many” is perhaps his best novel. It was an easy read as the story leads you in multiple directions with the various characters and sub-plots that developed around them. Similar to his previous books, each of the main characters had well-developed profiles, some good, some bad in this case, which enriched their involvement in the hunt to solve the murder. It was only in the last few pages of the book that the mystery was solved, which guarantees to keep the reader in suspense right up to the end.

A cop turned Private investigator in the roaring twenties still suffers from the death of his soul mate. While investigating a series of boot leggers, seemingly unrelated crimes, his last link with his soul mate is kidnapped. Suddenly the stakes to solving this case are much higher and the risks are deadly. A great murder mystery crime story set in a decade where life was both simpler and more vibrant. The author has a knack for story telling and it comes through beautifully in his writing. I really enjoyed this story and look forward to other books from this author.

A tragic old romance, a massive financial scam, and a young kidnapped woman propel New York investigator and former NYPD member Humphrey Barstal into a complex conspiracy involving, among other things smuggling, prostitution and dangerous gangs as he tries to save the only daughter of the woman he once loved and lost. Wayne Clark does a very good job of crafting an exciting murder mystery which is set in the America of the 1920s. The writing convincingly transported me back in time to a society that was both glamorous and fragile with dark undertones. Although I did not like some of the violent content, I would definitely recommend this book to readers who like historical whodunit novels.

One Murder Too Many by award-winning author Wayne Clark is a 1920s murder mystery with a classic cynical detective as the protagonist, Humphrey Barstal. Set in the 1920s, the book follows Humphrey Barstal as the main protagonist, a former NYPD cop turned private investigator whose services are sought by an aspiring writer named Frankie. Frankie has been recently duped out of $10,000 by a wily stock market broker and the story slowly unwinds.

Humphrey’s personal journey has been beautifully depicted throughout. The period setting and attention to detail make the story more thrilling. The story is craven with a gripping where every character is wonderfully portrayed which makes it a real one. The wonderful plot captivates the readers’ attention till the very end. Overall, a highly recommended murder mystery.

‘One Murder Too Many’ is a crime thriller story filled with mystery and intrigue. It is an interesting read because of the author’s style of writing, which invites the reader’s imagination to the world that’s been created. I recommend this book to those who like to read stories about murder investigations.

There is something charming about this murder mystery book that I love. I don’t know if it is because of the characters, the plot or the years in which it is set, but it simply fascinated me.
“One Murder Too Many” written by Wayne Clark tells the story of an ex-cop who becomes a private investigator after the death of his wife. But his pain continues when he finds out that he has to investigate the disappearance of the daughter of the love of his life. He will do everything in his power to rescue her.
Captivating, surprising and extremely well told, this story had me immersed in the reading from the beginning. I sincerely recommend it!

In “One Murder Too Many,” the author, Wayne Clark, recreates the fascinating world of the roaring ‘20s and combines it with the excitement and suspense of a thriller and detective novel. I am a big fan of books that really set the scene historically speaking and that draw convincing characters, both without bogging the story down. Clark manages this feat effortlessly in this page-turner about private investigator Humphrey Barstal.

Humphrey is still suffering from the loss of the woman he loved many years ago, and when her daughter is kidnapped, this is the last straw for him. He gets involved in a dangerous game of cat-and-mouse with ruthless criminals as he rushes to try and prevent more murders from happening, including the murder of the kidnapped girl. An excellent murder mystery.

5.0 out of 5 stars Imaginative murder mystery

One Murder Too Many by Wayne Clark is classified as a private investigator and murder mystery type of book. I am personally a huge murder mystery fan, so I am always up for a good book such as this. I was not disappointed by this one. I absolutely loved this author’s writing, and I felt like I connected very well with it. It felt similar to my own writing and imagination. The characters were well developed and he really uses his words well to create vivid photos in your head. He captivated my attention throughout the entire story, and it was often difficult to find a spot in the book to take a break because I was always wanting to read more.

One Murder Too Many by Wayne Clark is a very suspenseful and well-written mystery novel that was very hard to put down. The characters were described brilliantly and I could find myself being in the middle of the story. I enjoy good mystery novels and this one is certainly at the top of them. I will certainly be following this author and I highly recommend this book.

“One Murder Too Many” by award-winning Wayne Clark is a 1920s murder mystery with a classic hard-boiled detective in its protagonist, Humphrey Barstal. He’s a former NYPD cop who has never gotten over the love he let get away. When he finds out that the daughter of his lost love has been kidnapped as he investigates what seems to be an unrelated network of bootlegging and stock market scams in the Roaring Twenties, he springs into action.

This novel has carefully-crafted characters, page-turning suspense and a satisfyingly tangled plot. The period setting and attention to detail give the reader a vivid sense of the era, and Humphrey’s personal journey is beautifully written. Recommended to fans of murder mysteries.

“One Murder Too Many,” by Wayne Clark is an exceptionally well-written and highly engaging read that mystery fans will truly appreciate. I have yet to have read anything previously by Wayne Clark before and in all honesty, I am usually a bit put off by newer authors that I haven’t read before, but this one came to me highly recommended by a close personal friend so I opted to give it a shot. I am so glad that I did. This book was a great read that I highly recommend to others to check out as well!

5.0 out of 5 stars One fine whodunit mystery!

Canadian author Wayne Clark has been around – as a journalist, a reporter, and editor, a freelance writer and translator, a copywriter, and an astute observer of life in all its permutations. He travels (all over Canada, across the pond to Germany and Holland, and down in the third American level of Mexico), he sees, probably fantasizes, a lot. Stir that pot and out comes a novelist who takes risks and makes them pan out for him. His books to date – HE & SHE, THAT WOMAN, HOLLYWOOD VIA ORCHARD STREET, VINEGAR HILL BLUES, and now ONE MURDER TOO MANY. Having read all of his novels, this reader can comfortably recommend Wayne’s artistic achievements!

Writing a novel that celebrates the inimitable aspects of the 1920s, Clark’s book cover says it all! His always satisfying writing style makes even that period seem present, as he opens – “Tell me again about how you met my Mom?” The young woman sat at the end of the cigarette-scarred wooden table in what the man called his dining room. She would laugh, too, every time he called it that. In reality, it was the only table in the only room in his apartment. It sat at the foot of his bed. The kitchen was so tiny it could hardly be called a room. The restroom was down the hall shared with the building’s seven other tenants. Every time Eve asked the question – and she did at least once a year – she looked straight into the man’s eyes. They were gentle as always…’ A mood is set, and provides an introduction to the primary character – Humphrey Barstal – and Clark outlines his story briefly; ‘ A former New York cop turned PI can’t get over the loss of the only woman he ever loved. The sacred memory is violated when the woman’s daughter, the PI’s only link to her, is mysteriously kidnapped as he investigates a seemingly unrelated network of bootlegging and stock market scams in the Roaring Twenties.’ Clark succeeds in this territory better than other authors in this genre because of the style with which he writes. He invites us into dark places but keeps the focus on the frailty and durability of our humanity. There is much to be learned here and in the quality of fine prose and drama. Wayne Clark offers another solid novel.