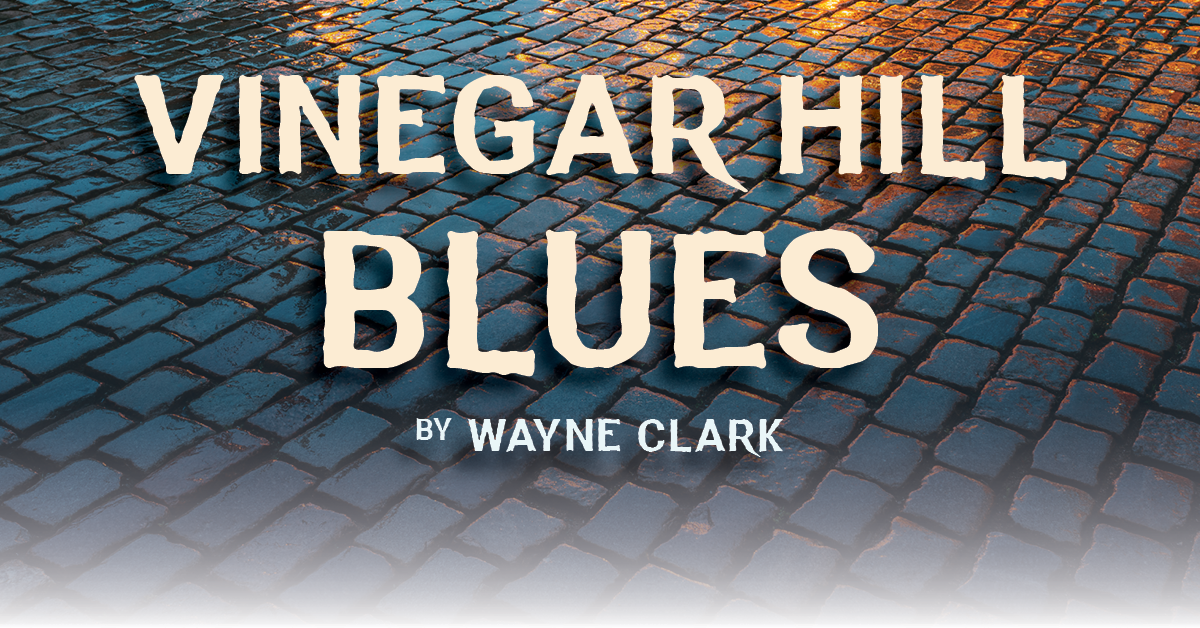 IndieReader Rating:
3.7
There is a moment in the first chapter of Wayne Clark’s historical fiction novel VINEGAR HILL BLUES that literally takes one’s breath away-the protagonist Bobby Stazilovsky has returned from war, somewhat dreading the return to the slums of Brooklyn and his invalid mother, but as he limps on his crutch down Jay Street to his childhood home, his dread turns to shock and confusion: his home is gone. As are all the buildings, and even the street itself. “Progress” has happened, which for Bobby’s old neighborhood means thirty acres of slums have been demolished and all the inhabits relocated, except for his mother, who has died in such obscurity, Bobby wasn’t even notified overseas. As far as inciting incidents go, Clark provides a stunner-the reader completely shares the sense of utter loss and confusion that Bobby feels, and wonders with him “where do we go from here?” The answer to this question takes up the entire rest of the narrative.
Bobby is an intriguing hero/anti-hero and readers will be (mostly) happy to spend the time in his head as he tries to navigate this new world. The tension between his strong desire to move forward and the pull of his petty crime background keeps the first half of the story clipping along at a good pace, but an odd, one chapter-long change to the narration perspective of the policeman Sam Brooks, followed by a exposition-heavy scene between Amanda Alvarado (Bobby’s childhood friend and longtime crush) and her father.
Clark gets us back on track eventually with Bobby’s involvement in a crime that threatens to upend everything he’s been working towards and his efforts to finally break free of his past once and for all. VINEGAR HILL BLUES is at its best when Bobby’s musings take him into philosophical territory- seeing men slump at a bar, he declares “That’s why God invented elbows, to brace and buttress heavy heads”- and when he thinks about or plays music; the passionate language and rhythmic sentence structures excite the imagination and give the reader hope that Bobby will escape his background of poverty and alcohol and bebop his way into the new world.

Readers Favorite Rating:
4 stars
… Author Wayne Clark perfectly captures the ambiance of 1940s New York and Brooklyn, incorporating some serious social issues that are still relevant today, such as racism, the plight of immigrants, and the rising number of homeless vets. Vinegar Hill Blues is the story of a jazz musician who is desperate to carve out a life for himself in 1940s New York by any means necessary. A sense of melancholic charm and humor laces the narrative as the pages flow past in the blink of an eye. Bobby is a complex character, an alcoholic jazz musician who struggles to get by and complete most of his endeavors. If you enjoy slice-of-life stories, Vinegar Hill Blues is the book for you.
— Reviewed by Pikasho Deka for Readers’ Favorite